Start To Fight Back Against Flooding!

Heavy rainfall and flooding has been affecting many households and businesses. Residents in some of the worst affected areas struggled to keep flood water out and were forced to leave their homes. Recent flooding has also brought disruptions to power supply and transport. Forecasted rain across country is feared to bring flash flooding to areas previously unaffected.

According to the Irish Times, the Government’s bill to cope with Ireland’s flood damage is expected to exceed €100 million. Nearly €60 million will be needed to fix damaged roads and bridges, but Ministers fear the bill could be significantly more.

Flood resistance is considered to be a practical flood protection measure for many properties and involves installation of flood doors, air brick seals, and waterproof coatings. However, flood resistance cannot be resorted to in all cases. In some situations, the building structure may be unable to cope with the water pressure caused by excessive flooding. This is when an alternative strategy of “flood resilience” is employed. Flood resilience means accepting the flood water will enter the property and taking measures to minimise the damage and disruption caused to the building. Where it is accepted that flood water will enter the building – e.g. because flood resistance measures are impractical or would be unable to cope with a high flood level (e.g. above 0.6 metres) – flood resilience measures can be put in place to minimise the damage and disruption caused by the flood.

Typical flood resilience measures include the use of tiled surfaces that can easily be cleaned after a flood and the siting of electrical sockets and circuits above the design height level.

A further aspect of flood resilience is the management of ingressing flood waters – diverting them away from where they would cause the most damage. Such a solution can be installed using Oldroyd cavity drainage membranes as shown in the diagram below.

Protect Your Property From Unwanted Bacteria

Flood water presents a general hazard to health and if your home or business was flooded, it is imperative that the property is disinfected.

SURFASOLOGY would like to introduce Micro X5 Sanitiser - a high efficiency disinfectant for flood remediation. 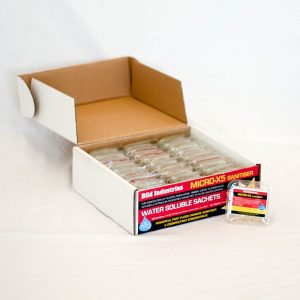 Micro-X5 Sanitiser is used in the sanitisation of properties prior to the initial cleaning and remedial works after flood-water damage.

Micro X5 Sanitiser has proven to be:

Our flood resilience and resistance systems can significantly reduce potential future damage and recovery times of properties. Please contact us on 01 832 1005 for advice on how to protect your property.

View all posts by: Liudmila Babrounik

We hope that you are all keeping safe and well.

We would just like to confirm that that we are open for business to support emergencies or ‘essential’ sites with structural waterproofing & construction products, services, and technical support during the current Level 5 restrictions.

We have both COVID compliant and remote working systems in place in order to provide our customers with an uninterrupted service.